verew
20:20, 25 May 2021
97
0
Like Terraria? Think Minecraft could use some of Terraria's ores, tools, weapons, enemies, bosses, and biomes? Try the Terraria Mod it adds lots of Terrarias features, and my goal is to soon have add all of Terrraria's content into Minecraft! Fight the Eye of Cthulu, dig for rare ores, explore the dangerous Crimson biome, and much more!

To get items can be found from the creative inventory.

Before you start please go to settings > how to play to see a guide of how to play the addon the guide includes recipes that aren't in the recipe book and other important info! 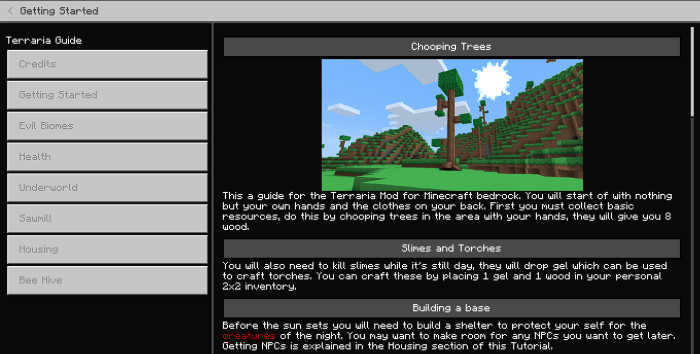 Now working! To use them you must put wooden arrows in your off hand

Now working! To use them you must put musket bullets in your offhand

Explosives can be obtained from random chests, and from the Demolitionist NPC. Hold them and they will throw explosives.

In this addon all vanallia minecraft biomes have been replaced by Terraria Bedrock ones.
The Crimson Forest

Flies around and swoops in occasionally, also creates tiny eyes. In it's second stage it will stop spawn in minions and will swoop in more often dealing more damage and at a faster speed. 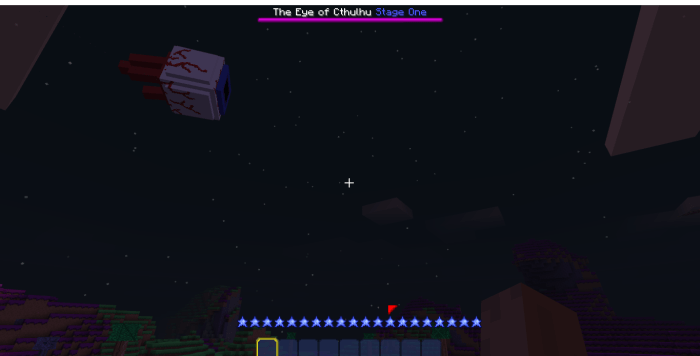 In it's first stage it will fly around the play and spawn in minions, and occasionally fly in. In the second stage it will teleport around.

WIll bounce and summon in slimes.

can be summoned by going to a dungeon which generates in plains biomes.

All mobs in the addon drop coins, you can collect these coins and use them with NPCs to get items. The first tier of coin is the copper coin, then the silver coins, then the gold coin, and finally the platinum coin.
All teirs

Crystal Hearts are found from layers 0 - 32 when broken they will drop a Life Crystals. Hold one in your hand and it will give you +20 hp. To get more hp put multiple of them in your crafting grid and you will get a higher level crystal. You will keep the extra hp even if you die.

The Mana Meter is a bar at the hud of the screen that displays how much mana the player has. Using items that say mana damage in there names will use some of the mana meter. The mana meter will restore its level over time.

Turn on all the Experimental Gameplay options for all features to work properly.
When ever you reload a world you need to disable the behavior pack then reenable it. This is caused by a bug from Mojang.