verew
10:18, 18 May 2021
109
0
Inhumanity is an addon that replaces villagers and pillagers with more human counterparts, as well as creates more daytime conflict by adding more humanoid mobs that will spawn naturally across the world. This addon seeks to change some graphical attributes of the game, add a few more mobs and features, but allow the player to feel like they are (somewhat) still playing classic Minecraft.

This is the revision of my first addon (formerly Bandits!) that seeks to replace the strange villager and illager creatures with humans more like the player character. It's true this gimmick has been done before, but I've always felt those addons were just...TOO extravagant...sometimes taking away from the experience of Minecraft more than they did add to it. Inhumanity is my solution to this.
To start it will change the villagers into more humanoid npcs without any unnecessary changes. They will still retain all professions and the ability to trade, as well as take on a new role. The only price to pay for this was about 4 pixels of their stature lol. But hey, they aren't hardened adventurers, court knights, or monsters. Only meek tradesmen afterall. 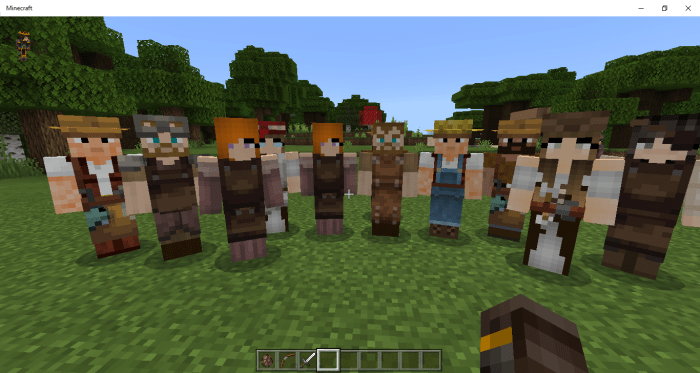 A new role for them in village life is the ability to be hired to become a village guard. To do this simply present them with a bow or an iron sword. Seems fair that if you want them to fight for you, you should supply the weaponry, right? Which is why this is available in Survival and they will still retain the ability to trade with you. To hire them as your personal body guard pay them with gold nuggets and they will guard a post (sit) or follow you, fighting anyone or anything. Yes, this too has been done before, but how could I exclude it? 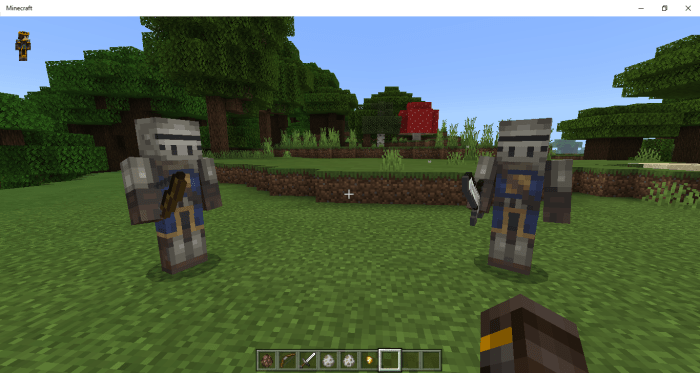 Now you have have guards and henchmen, but what's to fight? This is where mostly the bandits will come in. Ten new mobs that will spawn naturally across your world during the daytime. Included so that while mining there is a "Oh crap another bandit." moment. They will spawn with either a bow, an iron sword, an axe, or a crossbow.  Another new mob is the Mage. A master of magic who will shoot destructive magic at the player. This mob is a bit rare and also a little difficult to kill (as well as get a screenshot of) as he will teleport when encountered. 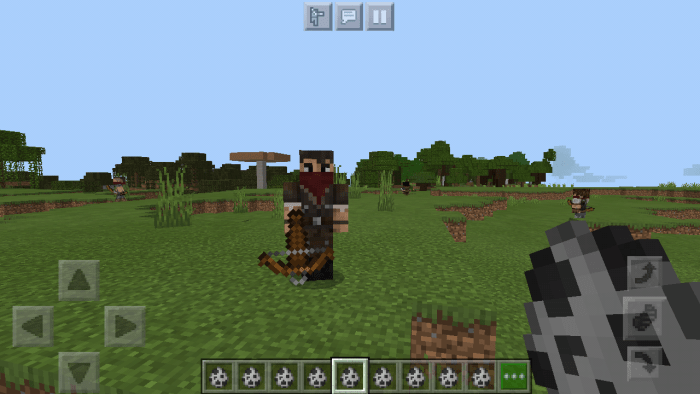 As well as the villagers, the pillagers are now also humanoid. Joining them in the world is a new mob, the pillager soldier, who will spawn with either a bow or a sword. They will spawn naturally in the world like the bandits. You can think of them as pillager scouts, but if I'm being honest I just put them in so that you and your guards would have an enemy force to spawn and fight against in massive battles. ;) 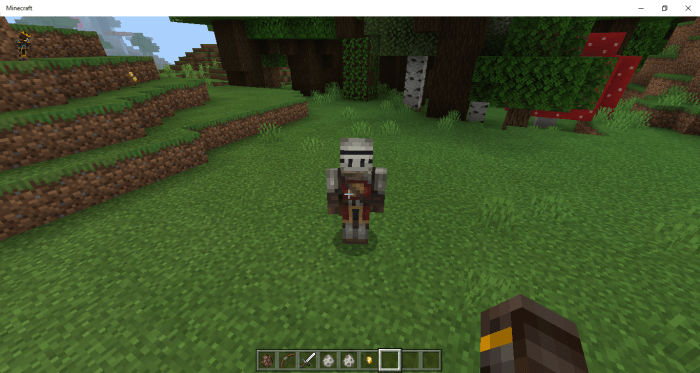 A few other tweaks and textures have been changed just to my preference. One example is I have always wondered why does the IRON golem look like he's made from mossy stone? If it's made from iron, I feel like it should look more like it's made from iron. Sort of like...yea...an "iron giant"! 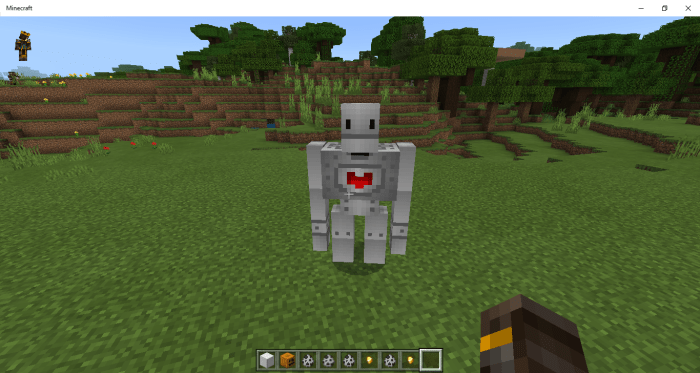 So. There it is. In the future I plan on adding various things to this addon. Other humanoid illagers, fixing the bugs I'm sure are to come. This is my first real addon, originally made on a smartphone with notepad for personal use, so go easy on me. lol. Hope you guys enjoy! All suggestions and requests are welcome!
As you can see this works on mobile and windows 10. Haven't tested on xbox but would like some feedback about it.

Might work with older versions at min 1.13.0 but haven't tested it. Made with 1.16.2
The file is a mcaddon so just simply download the file click on it (open with Minecraft) and it will automatically install!
Make sure to uninstall any previous versions before updating! (This includes the previous Bandits! addon)
As requested, each aspect of this addon is presented here as three separate addons in case you favor one aspect more than another. The names should be self explanatory.
!!!IMPORTANT!!!
I am honestly not sure why but I have noticed there are some errors when using the packs together in a wrong order. I was unable to fix this completely but my suggestion to avoid any errors is to make SURE that from BOTTOM to TOP the order of these addons should be VillageGuards ^ BanditMobs ^ HumanMobs. When using any combination of these with other addons just ensure that these addons follow that order.